In this tutorial we will build a sample application composed of two components and an API. The following diagram shows the bundle architecture (simplified): 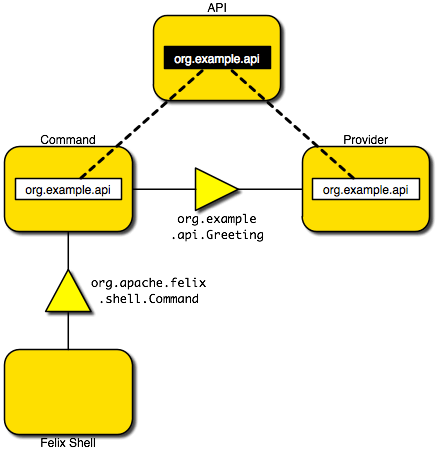 In the tutorial we create the top three bundles (rectangles):

Please refer to the Installation Instructions.

If your current workspace is not configured as a Bnd Workspace yet, before creating a project, we need to set up the Bnd OSGi Workspace.

If this is the case, you are now ready to create your first Bnd OSGi project!

First we need to create a Bnd OSGi Project. This is just a standard Eclipse Java Project, with an additional builder for constructing OSGi bundles.

Write and Export the API

In the src directory of the new project, create a package named org.example.api. In the new package create a Java interface named Greeting, as follows:

The project we have created defines a single bundle with a Bundle Symbolic Name (BSN) of org.example.api (i.e., the same as the project name). As soon as we created the project, a bundle file named org.example.api.jar was created in the generated directory, and it will be rebuilt every time we change the bundle definition or its source code.

However, the bundle is currently empty, because we have not defined any Java packages to include in the bundle. This is an important difference of Bndtools with respect to other tools: bundles are always empty until we explicitly add some content. You can verify this by double-clicking the bundle file and viewing its contents: it will only have a META-INF/MANIFEST.MF entry.

We want to add the package org.example.api to the exported packages of the bundle. So open the bnd.bnd file at the top of the project and select the Contents tab. Now the package can be added in one of two ways:

As soon as this is done, a popup dialog appears titled “Missing Package Info”. This dialog is related to package versioning: it is asking us to declare the version of this exported package. Click OK. 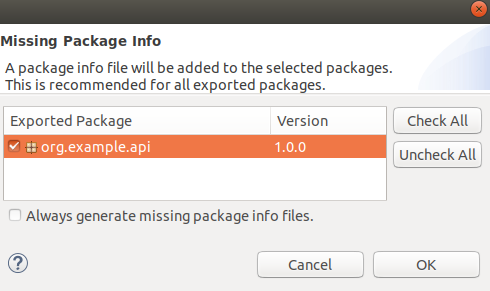 The Contents tab should now appear as in the following screenshot: 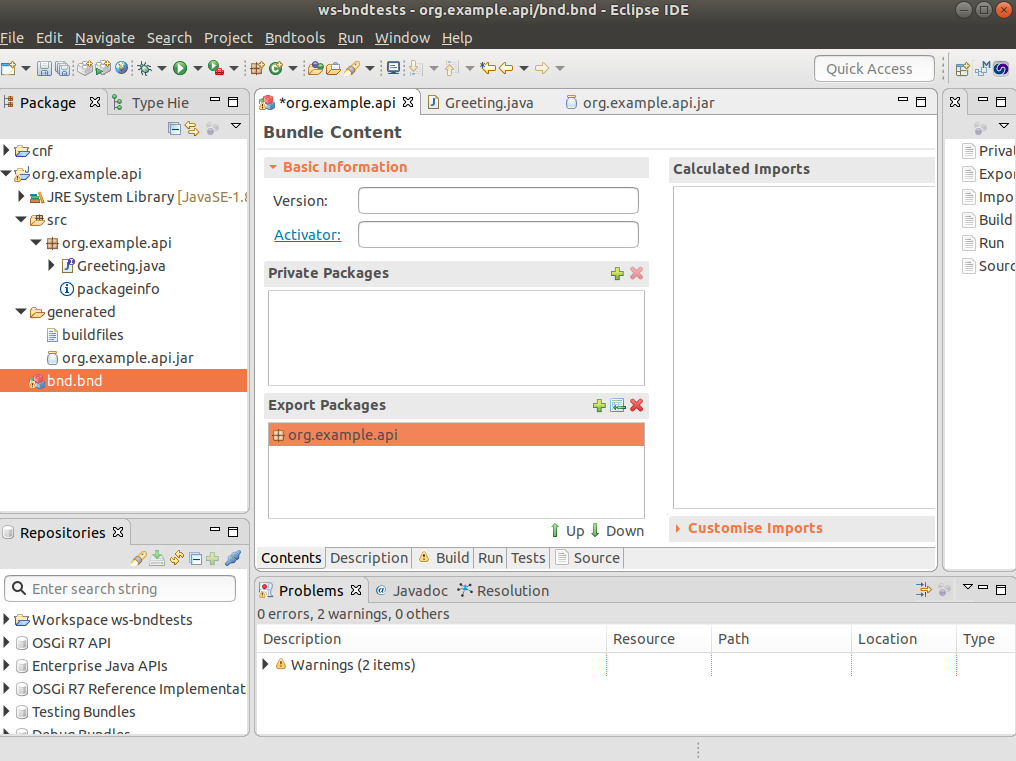 Save the file, and the bundle will be rebuilt to include the selected export.

We will now create another project that defines two bundles: a provider and a client of the Greeting API.

Create another Bnd OSGi project, named org.example.impl. At the Project Templates step, select Component Development and then proceed as for the previous project. 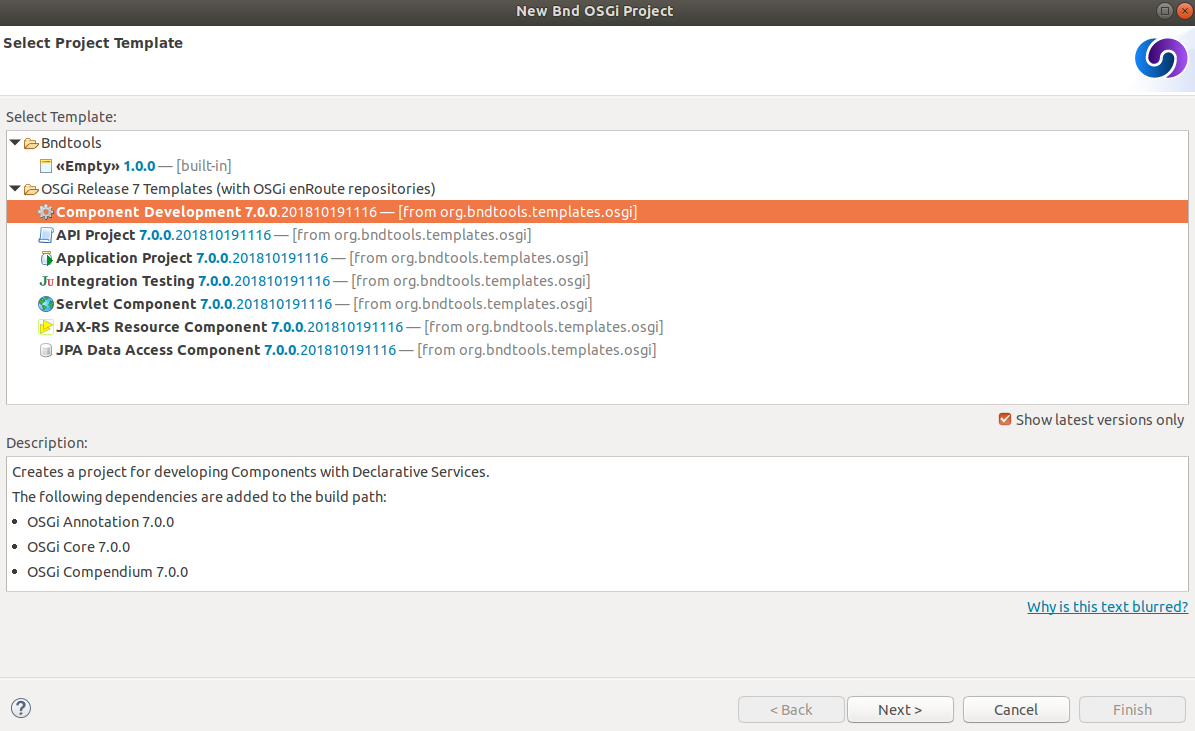 Add the API as a Build Dependency

We need to add the API project as a build-time dependency of this new project.

The bnd.bnd file of the newly created project will have opened automatically. Click the Build tab and add org.example.api in either of the following ways:

In either case, the org.example.api bundle will appear in the Build Path panel with the version annotation “latest”: 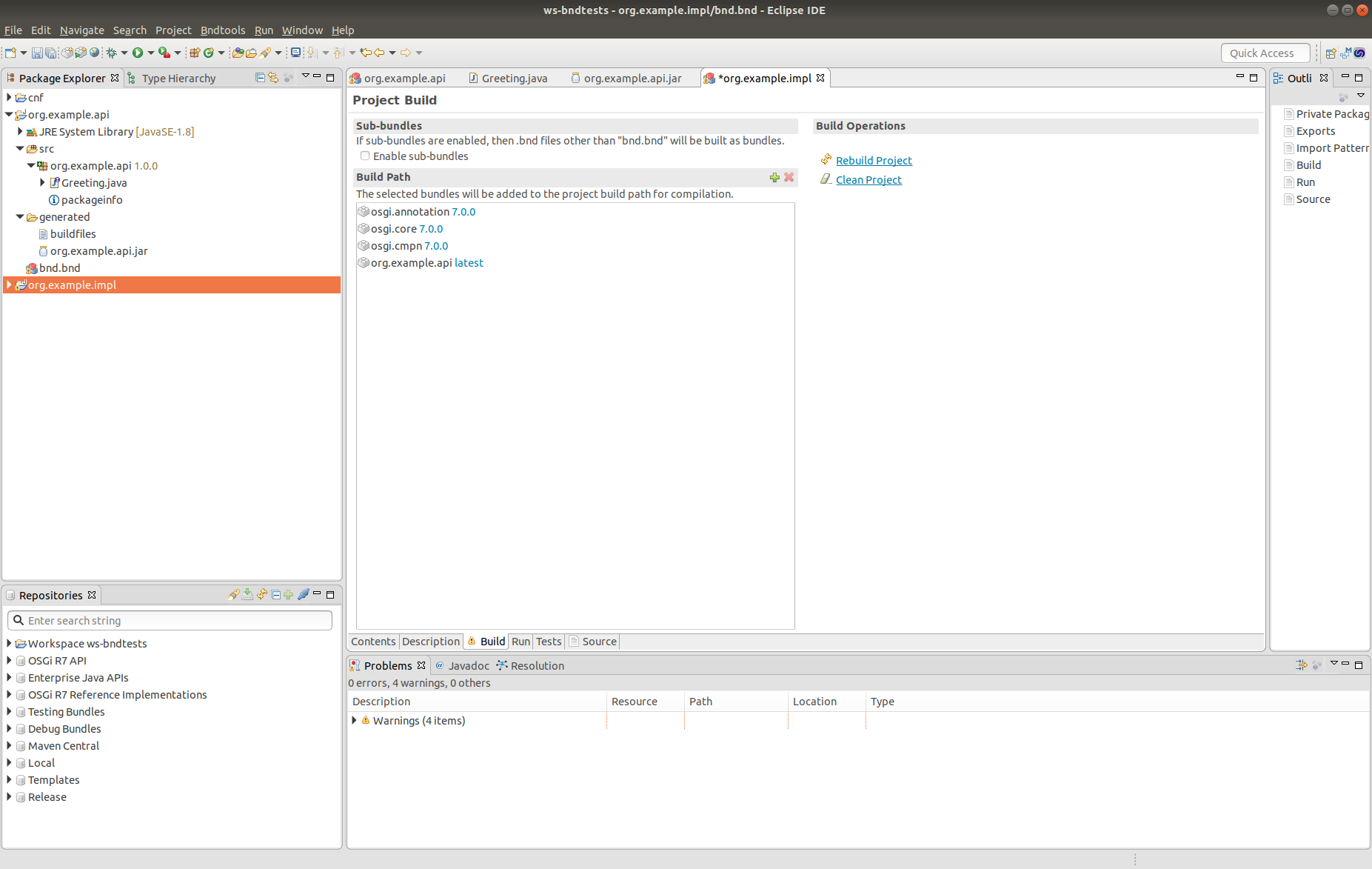 We will write a class that implements the Greeting interface. When the project was created from the template, a Java source for a class named org.example.impl.Example was generated. Open this source file now and make it implement Greeting:

Note the use of the @Component annotation. This enables our bundle to use OSGi Declarative Services to declare the API implementation class. This means that instances of the class will be automatically created and registered with the OSGi service registry. The annotation is build-time only, and does not pollute our class with runtime dependencies – in other words, this is a “Plain Old Java Object” or POJO.

We should write a test case to ensure the implementation class works as expected. In the test folder, a test case class already exists named org.example.ExampleTest.

Use the already provided test method and substitute its implementation with the following:

Now right-click on the file and select Run As > JUnit Test.

Verify that the JUnit view shows a green bar. If not, go back and fix the code!

Note that, since this is a unit test rather than an integration test, we did not need to run an OSGi Framework; the standard JUnit launcher is used. Again, this is possible because the component under test is a POJO.

As in the previous project, a bundle is automatically built based on the content of bnd.bnd. In the current project however, we want to build two separate bundles. To achieve this we need to enable a feature called “sub-bundles”.

Right-click on the project org.example.impl and select New > Bundle Descriptor File (.bnd). In the resulting dialog, type the name provider for the Bnd File name and click Finish. 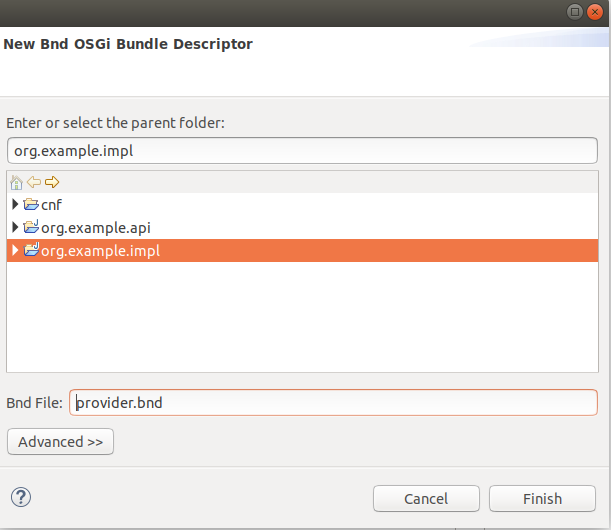 A popup dialog will ask whether to enable sub-bundles. Click OK. 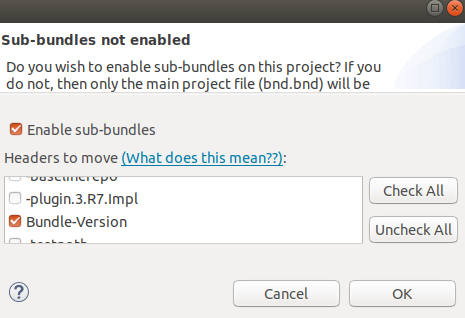 Some settings will be moved from bnd.bnd into the new provider.bnd file. Add the package org.example.impl to the Private Package of this newly created file. You should now find a bundle in generated named org.example.impl.provider.jar which contains the org.example package and a Declarative Services component declaration in OSGI-INF/org.example.impl.Example.xml.

We’d now like to run OSGi. To achieve this we need a “Run Descriptor” that defines the collection of bundles to run, along with some other run-time settings. This file is automatically created with the Component Development project template that we have used, and it is named launch.bndrun.

For creating a new “Run Descriptor”, in case you would need more than one, right-click on the project org.example.impls and select New > Run Descriptor File (.bndrun) . In the resulting dialog you will be asked to select a “Run Descriptor” from a template. Choose the Felix 4+ option and click Next. 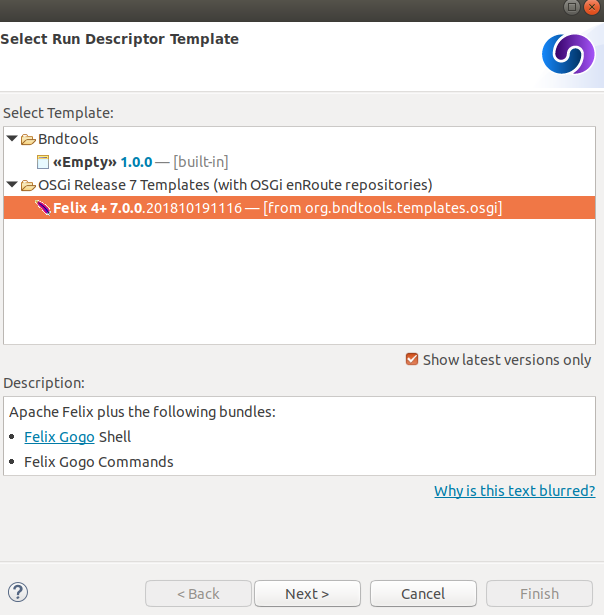 In the next page enter the name of the file and click Finish.

In the editor for your launch.bndrun file, click on Run OSGi near the top-right corner. Shortly, the Felix Shell prompt “g!” will appear in the Console view. Type the lb command to view the list of bundles:

Next we want to include the org.example.impls.provider and osgi.cmpn bundles. This can be done as follows:

The Run Requirements panel should now look like this: 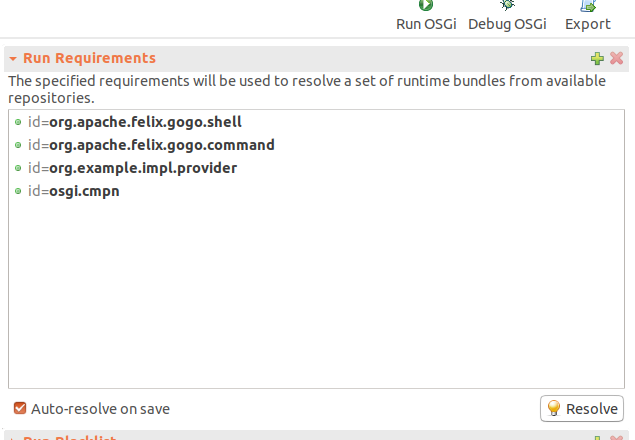 If is not already selected, please, select the Execution Environment in the Core Runtime session of the file.

Check Auto-resolve on save and then save the file. Returning to the Console view, type lb again:

The provider bundle has been added to the runtime dynamically. Note that the API bundle and Apache Felix Declarative Services are also added because they resolved as dependencies of the provider.

We can now look at the services published by our provider bundle using the command inspect capability service 6:

Our bundle now publishes a service under the Greeting interface.

Finally we will write a component that consumes the Greeting service and publishes a shell command that can be invoked from the Felix shell.

First we need to make the Felix shell API available to compile against. Open bnd.bnd and change to the Build tab. Add org.apache.felix.gogo.runtime to the list of build dependencies, and save the file: 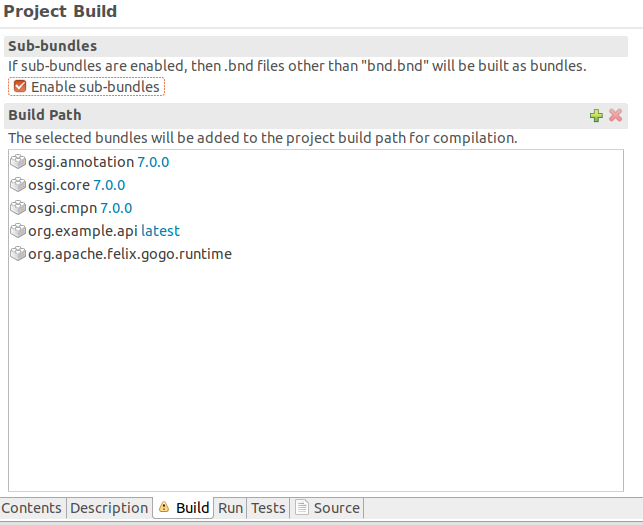 Now create a new Java package under the src folder named org.example.command. In this package create a class GreetingCommand as follows:

Create a Bundle for the Command Component

Add the package org.example.command to the Private Packages panel of the newly created file. As before, this can be done using the “+” button in the toolbar or by drag-and-drop.

Then save the file.

Add the Command Bundle to the Runtime

Switch back to the editor for launch.bndrun. In the Run Requirements tab, add the org.example.impls.command bundle, and save the file.

The command bundle will now appear in the list of bundles when typing lb:

Finally, the greet command will now be available from the Gogo shell: